The All New ASUS Z790 Motherboards

Introducing the all-new ASUS and ROG Z790 Motherboard!
The all new Z790 motherboards supports all 13th Gen Intel Processors and giving you the power to break boundaries!

Built with higher clock speeds and supports the all new DDR5 memory, overclock your systems and
create a whole new level of overclocking experience and push your systems to the best it can! A new experience awaits you!

AEMP II
The all new Z790 ASUS motherboards come built with all new Enhanced Memory Profile II!
With the exclusive new update, it allows your DDR5 Memory to work with your CPU on a higher optimized level compared
to previous generations of motherboard! An uplift of 41.6% during overclocking!
With the new feature, it makes it easy to make the tuning you need above the default values
but also gives you the optimized stability for your system to achieve the ultimate superior performance! 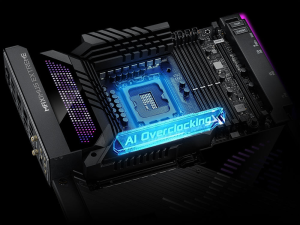 AI Cooling II
ASUS AI Cooling II allows maximum optimization on the fans when it monitors the CPU temperature! This optimized process
via the ASUS-exclusive algorithm that tracks temperatures based on how much the workload is
at the current moment and pair it with the fans speed required to keep the system cool! 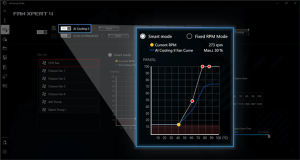 Robust Power
With new and larger VRM (Voltage Regulator Module) design on the new Z790 motherboards,
users can expect a better power control and more optimized way of running the 13th gen Intel Processors,
giving you the most superior performance, you need for all your activities!
Power is now efficiently delivered throughout the entire motherboard while supporting the 13th Gen Intel Processor,
your system can stay cool under a heavy workload! 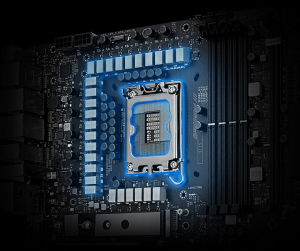 Ultra-fast Bandwidth
The motherboard also offers you Wi-Fi 6E capability that allows maximum Wi-Fi connectivity every time!
Ethernet connections are now blazing fast as well, supporting you with 10GB and 2.5GB Ethernet connections.
Gaming or even video streaming will definitely be much faster, enjoy every moment of your internet connections!

Bonus! There are now USB4 ports on the Z790 motherboards to allow fast and swift files transfer, stable device usage as well! 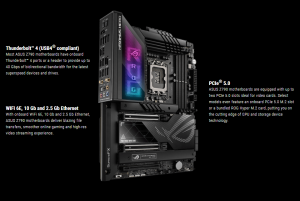 PCIe Slot Quick Release
With ASUS taking in feedback throughout the years on customers having difficulty removing the graphics card
as the latch of removal is too deeply embedded on the motherboard, a quick release button was installed for more flexibility!
This allows consumers to remove the GPU easily whenever necessary from the side with a single tap of the button! 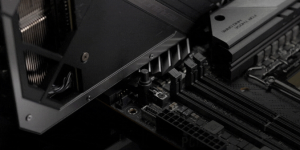 With a fresher look and more features on board the all-new Z790 motherboards to pair with the 13th Gen Intel Processors,
expect a huge leap of performance for both PC enthusiasts and gamers, and get ready for an awesome and reliable usage every time!

Available at all major custom PC Builder shops near you, get them today! 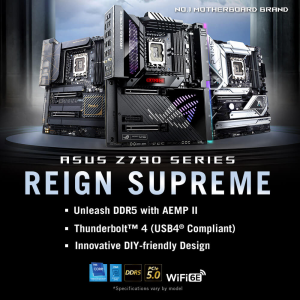